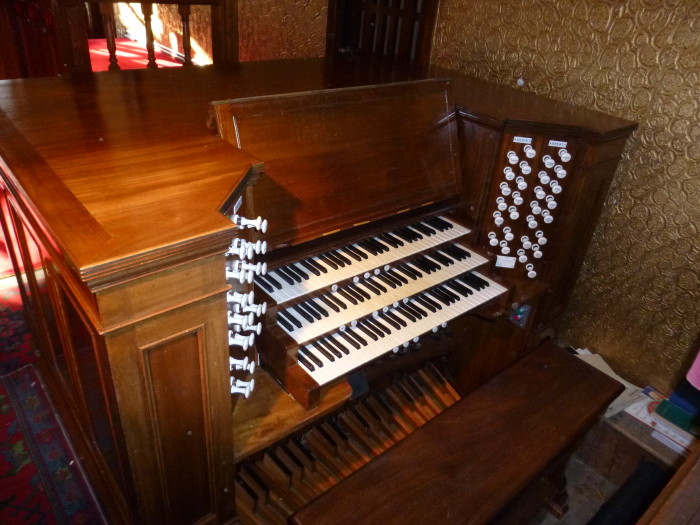 We currently have an instrument in storage that we rescued five years ago from the Tabernacl Chapel, Abergele Road, Colwyn Bay in North Wales. The church was closing and the organ needed a new home.

This organ is a three manual and pedal pipe organ in original condition and was tonally designed and project managed by Alfred Hollins, a well-known blind organist and composer. At one time, Alfred Hollins was organist at the Free St George’s West Church in Edinburgh.

In 2014, Jeremy Cull wrote a piece about the instrument for the Edinburgh Society of Organists

A Hollins Organ In Wales

First published in Console, the magazine of the Edinburgh Society of Organists, Issue 145 – September 2014. Reproduced with permission of the late author.

On a recital trip to North Wales in July this year, I had the great fortune to see and play a remarkable, and, to me, hitherto unknown Hollins-designed organ.  (It was at the suggestion of Roger Fisher with whom I was staying for the week).

The 35 stop organ was built by Rushworth & Dreaper in 1924 (then at the zenith of their organ-building prowess) for the music room of a Mr E Blackburn in his residence “Bryn Eisteddfod” in Glan Conway in Colwyn Bay on the North Wales coast.  The consultant and designer was our own Dr Alfred Hollins, who was a friend of Mr Blackburn; Hollins mentions him briefly in his autobiography A Blind Musician Looks Back.  The organ was located in a caseless chamber behind grilles complete with an extra set of shutters in front of the organ – in effect a general crescendo pedal, which is now no longer extant.  In 1936, the organ was transferred from Blackburn’s house to the Methodist Tabernacle in the centre of Colwyn Bay where it remains to this day.  The church has recently closed, and the future of the organ and building is uncertain.

I was particularly excited about this organ as its specification is uncannily similar to that of the 1935 Hollins/Rushworth instrument at the Reid Memorial Church here in Edinburgh where I played for nigh on 15 years.  The specification is marginally more lavish (presumably Mr Blackburn had money to spend) than the Reid Memorial; but the quality of the voicing and workmanship is just the same. The Great diapason chorus is as one would expect, with two noble 8-foots underpinned by a stringy 16’ Geigen and bright upper work, with an increase in melodic voicing in the treble; the Swell chorus is based on a Geigen Diapason (as at RMC) but capped by a four-rank quint mixture, and also has two exquisite flutes. The chief joy of the Swell division however – dare I say the whole instrument – is the 16-foot French Horn: it serves as a chorus reed in conjunction with the 8-foot Trumpet, and has a characteristic plumpness in the lower register (Hollins’ correspondence with R&D over the Reid Memorial organ confirms that he disliked “rattily Fagottos”!) but in the top of the range it has a fabulous sweetness that is as good as the French Horn at Reid Memorial; quite sensational. The Choir organ is an orchestral division as we have come to expect from Hollins.  As well as 16’ and 8’ strings and Celeste, it boasts stunning orchestral flutes at 8, 4 and 2-foot pitch; there are also orchestral imitative reeds.  The 8-foot Choir Tromba is enclosed, along with the 16-foot extension Pedal Ophicleide – a thoughtful piece of planning.  The Pedal division is robust with a mighty Open Diapason as the basis; the Choir 16-foot string is duplicated, which gives another quiet colour to add to the Bourdon.

The only change that was made, and very much of its time, is that the Great Stopped Diapason was replaced by a three-rank mixture sometime in the 1970s. It’s a shame, as Hollins like to have a quiet flute on his Great divisions instead of a Dulciana, say; at the Reid Memorial this is still in situ and is a useful “binding” stop when accompanying.  The Hollins/Rushworth 1929 rebuild at Morningside Parish Church had the same on the Great, but this has been moved to the Choir.

So what of the overall effect?  Those readers who are familiar with the rich orchestral opulence of the Reid Memorial or the Caird Hall will recognise the tonal palette immediately.  Everything blends superbly: all the strings and diapasons, for example create a luscious effect – add the sub and super-octave couplers on the Choir strings, and it is clear that Hollins’ year-long trip to America was not wasted (he had been particularly influenced by Ernest Skinner). The tutti is rich and robust; the reeds giving colour and just enough punch and brilliance without being too clangy.  Words cannot describe it adequately, but, in short, a remarkable revelation.

The instrument is described in some detail on the National Pipe Organ Register web site.