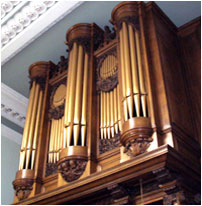 Forth Pipe Organs were invited to carry out a historic restoration of this magnificent Brindley and Foster original three manual and pedal pipe organ, together with the re-leathering of the soundboards, tubular pneumatic action and wind reservoirs.

David Page and Jim Smail of Forth Pipe Organs discuss the technical apects of the recently restored 1913 Brindley and Foster organ in The Grand Lodge in George Street. The video also gives an opportunity to see and hear Simon Nieminski playing this unigue and historic organ.

Charles Brindley began his career in Germany. It is thought that Brindley worked under Edmund Schulze at Paulinselle. After Schulze, Brindley set up his first workshop in Carver Street, Sheffield and traded under the name “Charles Brindley”. It is thought that Brindley had already acquired Shulze’s scales for Diapasons and stops of the Hohl Flute and Gedact families. In early years, Brindley employed a number of skilled German organ builders and at a later date a brother of Edmund Schulze was also employed. During this time, Brindley constructed a number of good quality mechanical action instruments with conventional “slider soundboards”, a far cry from the design and action used in his later organs, which were built in partnership with A. Healy Foster.

Foster, a skilled voicer (especially of strings and reeds) and accomplished organist, joined Brindley’s business not long after Brindley began trading. Foster is said to have studied voicing with Willis and Cavaille-Coll. The new partnership went on to design and build many new organs in a new, purpose built, works at Columbia Place and Farnum Street. Brindley was a very good engineer and strove to design better and more reliable instruments. During this period many patents were awarded to Charles for inventions in tubular pneumatics.

In 1885, at the International Invention Exhibition, Brindley and Foster were awarded a silver medal for general excellence.

Charles Brindley died on 6 October 1893, having retired in 1887 but was replaced by his son, Charles Frederick Brindley, who continued the partnership with A H Foster.

Throughout their existence Brindley and Foster never stopped evolving. They continued to develop and improve their soundboards, until the “slider soundboard” was replaced with a new “sliderless chest” with an individual action to each pipe within the organ, always striving to gain mechanical efficiency and purer tone from organ pipes at all times and in all conditions.

In 1902 the first “truly scientific key-box” was patented, and in 1904 the “Charles Brindley System” of design and construction was launched.

These systems lead the way for new designs to aid the organist such as “Brindgradus Pedal”, “Transformers”, “Touches”, “Stop Transference”, “Governors” and “Controllers”

The instrument in The Freemason’s Hall is a fine example of the “Charles Brindley System” and incorporates a “Brindgradus Pedal”, which acts as a Crescendo Pedal, allowing the organist to build to full organ without changing the combination drawn at the time.

Between 1909 and 1914 Brindley and Foster built, on average, one organ a month. The Freemasons Hall was one of the last instruments to be built before World War I.

With World War I came lean years and orders for new organs became few and far between. Fortunately the firm had a very large tuning round and was able to carry on trading. Unfortunately many of the skilled staff left the firm to seek employment elsewhere and after a long uphill struggle, the company finally went into the hands of the Receiver (25 November 1936).

Throughout 1937 and 1938 the business was run by the Receiver. Finally on 10 March 1939 the Company was dissolved by the Registrar.

Founded by William Scott Morton (1840-1903) and his brother John (1842-1904) in 1870, the company first specialised in furniture and then diversified into interior decoration. After William’s death in 1903, the firm continued under William’s three sons, receiving notable commissions from Scottish architects including Sir Robert Lorimer and Reginald Fairlie & Partners.

The gold front pipes are a mixture of speaking and dummy pipes.